A STROLL THROUGH THE DIFFERENT MONUMENTS OF VEJER DE LA FRONTERA

The walled enclosure dates from the 15th century and has an irregular layout as a result of its adaptation to the topography of the site and covers an area of just over 4 ha.

The radius of the wall is 2 kilometres and its thickness is 1.5 – 2 metres, which increases considerably as it approaches the city gates, which are preserved in their original state: Arch of the SECURITY, Arch of the VILLA, Arch of SANCHO IV and Arch of PUERTA CERRADA.

Located on the west side. It was built at the end of the 15th century, during the reign of the Catholic Monarchs.

It is a semicircular arch framed by a moulding, of which only part has survived. Its name is due to the marble relief that can be seen on the inside, which resembles an “Axe or Segur”, meaning the judicial power of Rome.

ARCH OF THE VILLA

Located on the eastern front.

It was the most important access, as it communicated with the Barca slope and the Concejo fountain, although curiously it is the only one that has not preserved its original state.

The Plaza de España is accessed from here.

Located on the northern flank of the walled enclosure facing Medina Sidonia.

It is a semicircular arch with a moulded impost through which the thickness of the wall can be seen. Just above the arch is a baroque noble coat of arms. In this doorway, the ground has been lowered by almost two metres to save the difference in level of the Corredera street, leaving the foundations in the living slab in view.

Its origin dates back to the 15th century and it was a defensive tower as it was used to make “smoke signals” to communicate with Medina Sidonia.

Here we can see the remains of a belfry that once belonged to the chapel of the Casa del Mayorazgo, as this house is attached to the wall and the tower.

From the tower we have spectacular views of the mouth of the Barbate River, the coast of Zahara de los Atunes and part of the Natural Park of La Breña y Marismas de Barbate. Its main mission was to guard the village.

Vejer’s walled enclosure is most accessible through the western gate. It was the main gateway known in the 15th century as the Puerta de la Villa, which was used for the transit of troops, merchandise, livestock and agricultural products. It was the gateway to Cadiz and Gibraltar. For this reason, and because of its easy access, it was decided to build a bastion with an inner enclosure with a double defensive gate to prevent any intrusion. This smaller enclosure was also used to prevent the entry of contagious diseases or to control the import of goods and other taxable supplies.

Rescue work, restoration of battlements and resurfacing of walls was carried out in 1977 and the internal refurbishment in the 1990s.

The surface area of the old bastion is now shared between public and privately owned spaces.

PARISH CHURCH OF THE DIVINE SAVIOUR

Possibly built on the site of an ancient mosque, it is a basilica church with a rectangular apse and three naves, the central nave being higher than the side naves.

The architectural ensemble consists of two distinct parts corresponding to two stages of its construction: The Gothic-Mudejar chancel from the 14th century and a late Gothic extension from the late 15th and early 16th century. There are three chapels in the side aisles.

The altarpiece of the main altar, made by the master Francisco de Villegas in the 17th century and executed in cedar and borne wood, stands out.

It dates from the 10th and 11th centuries, during the reign of Abderraman I and his successors. It is located in the highest part, and possibly the oldest inhabited area of Vejer, on the base of an earlier one from the Arab period.

It consists of two courtyards: the main courtyard where the old cistern is located, which collected rainwater through a channel. The floor of the castle is herringbone-shaped to prevent the animals in the stables from slipping. From the parade ground you can see the battlements, access them and enjoy beautiful views of the whole town. In this courtyard is the private house that was transformed by Pedro Muñoz de Arenillas in the second half of the 19th century, which was compared to the Marquis of Martorell.

In the 14th century it was the residence of the Dukes of Medina Sidonia, Lord of Vejer. It is included in the group of “minor castles” because it has only one entrance and exit gate at the most accessible and easily defended point. The horseshoe-shaped door framed by an alfiz is the most precious remnant of Moorish origin that still remains.

Inside the castle there is a plaque commemorating the twinning of Vejer and Chef-Chauen. The two cities are closely linked for historical and cultural reasons.

CONVENT OF THE CONCEPTIONIST NUNS

It is the only vestige of the original Convent of Our Lady of the Conception founded by Juan de Amaya in 1552 for his own burial and that of his wife. This is one of the so-called “box churches”, with its Renaissance-style main doorway, the spherical dome erected over the main chapel and the vaulted crypts of the founders being of particular interest. Next to it is the most emblematic street in the city, the Arco de las Monjas, consisting of a succession of buttresses that support the side wall, these buttresses were placed as a result of the earthquake of the 18th century.

The building currently houses the Municipal Museum of Customs and Traditions of Vejer.

Baroque-style manor house, dating from the 18th century. Its interior consists of two courtyards, through which it communicates with the Torre del Mayorazgo and a stretch of the wall. As it is currently a house in which several families of neighbours live, it can be visited at reasonable hours so as not to disturb them, and always asking permission. There is no entrance fee, although you can leave a tip in the letterbox in the main courtyard to contribute to the upkeep of the courtyards and the Tower.
IR

PALACE OF THE MARQUIS OF TAMARÓN (MUSEUM)

An early 18th century manor house built next to the Arco de la Segur, outside the walled enclosure. It currently houses the MUSEUM COLLECTION OF HISTORY AND ARCHAEOLOGY OF VEJER. This new museum has 13 rooms, 3 of which are for Fine Arts, with works by Morillo Ferradas, García Chicano and Julia Relinque; 8 for archaeology with important remains of all the cultures that have passed through Vejer and one for temporary exhibitions.

Its origins date back to the 16th century when the city overflowed the walled enclosure. During the 16th and 17th centuries it was the venue for various bullfighting festivals organised by the noblemen and gentlemen of Vejer. In 1955 a fountain was built in the centre of the square made of Sevillian tiles, and since then it has been popularly known as the Pl. de los Pescaítos. The Town Hall stands in this square.
IR

Nothing identifies Vejer more than the silhouette of a windmill. In the 16th century, the flour mills that existed in Vejer were all water-powered, including those owned by the Duke of Medina Sidonia in the rural district of Santa Lucía. It was with the advent of the liberal regime in the 19th century that the first windmills were built in the town of Vejer. However, the strong easterly winds in the area made its implementation impossible. The Carthaginian style of mill was then installed, with a more robust body than the Manchegans, so that it was more resistant to strong gusts of wind. In the sixties of the 19th century, the five mills located in the San Miguel district were built, of which three have been preserved and have been restored. Nowadays you can visit (on request) the interior of the San Francisco Mill where you can see the pieces of its antique machinery.

Located on the Vejer-Barbate road, 5 km from Vejer. This place was formerly a Roman villa and later in the Visigothic period. According to epigraphic sources, the Ermita de la Oliva was built on the site of this basilica in the year 674, and therefore, the Ermita de la Oliva is built on the site of this basilica. Here there is a funerary monument with a pagan inscription containing the skeletal remains and ashes of the protomartyr Esteban, the martyr saints Servando and Germán de las Sevillanas Justa and Rufina from Cádiz. The carving of the Virgin of La Oliva was made by the Sevillian sculptor Martín Alonso de Mesa in 1596. It is made of safe pine (a wood widely used during this period), stewed and polychromed. He carries the child on his left side, while on his arm he holds an olive branch, in keeping with the oldest tradition. The tunic is also gathered on the same side with simple folds, which fall heavily and tend to widen the figure downwards, so that the feet show briefly. This place becomes a must for all pilgrims on the 7th of May, when a pilgrimage is held to commemorate the commemoration of the Virgen de la Oliva as Patron Saint of Vejer.
IR

It is a 16th century water conduction system, possibly built by reusing materials from an earlier, older one, and has become one of its most emblematic symbols. Next to this mill there are 7 water mills from the 16th century that were used to grind wheat and obtain flour, of which we can still see some parts today, such as the water pipes, the vaults, the remains of the buckets and some millstones. In this century these mills were owned by the Dukes of Medina Sidonia who charged a rent for their use. At the beginning of the 20th century, the Count of Villariezo inherited Santa Lucia from the ducal house and created an electricity company, which supplied electricity and water to the population of Vejer, making it one of the first towns to have other services in private homes. Today this company belongs to the Sevillana company. The Rural Nucleus of Santa Lucía has been declared a Natural Monument due to the richness of its landscape. Santa Lucia has lush vegetation, due to the richness of the soil and the amount of water, as it is located on the slopes of the Muela Plateau.
IR

This tower has become the hallmark of El Palmar beach, located just 10 km from the town of Vejer. Its function was to guard the coast. This type of tower was widely used during the 17th and 18th centuries, and was placed all along the coast of Cadiz to provide surveillance, as it was very likely that pirates and bandits would invade. It communicated with the other towers by smoke signals during the day and fire signals at night.
IR 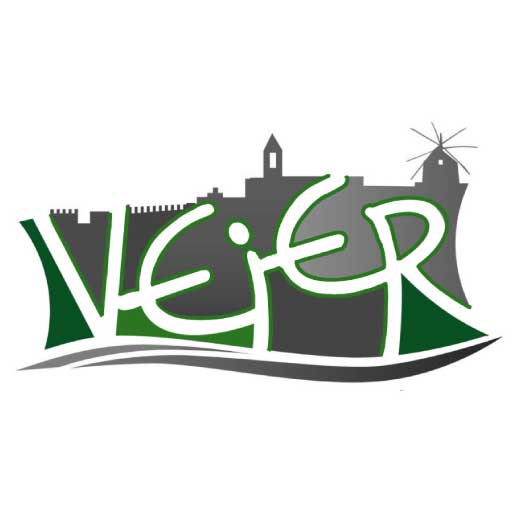 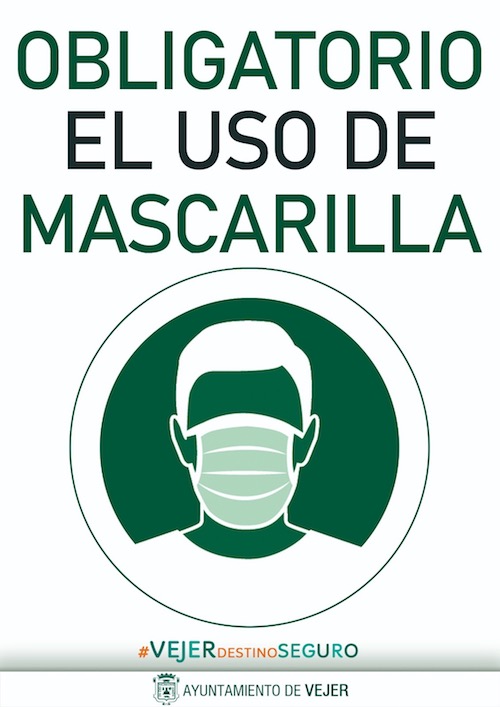